Microscopic colitis is a digestive autoimmune disease in which the body reacts to an unknown stimulus, causing inflammation in the colon. 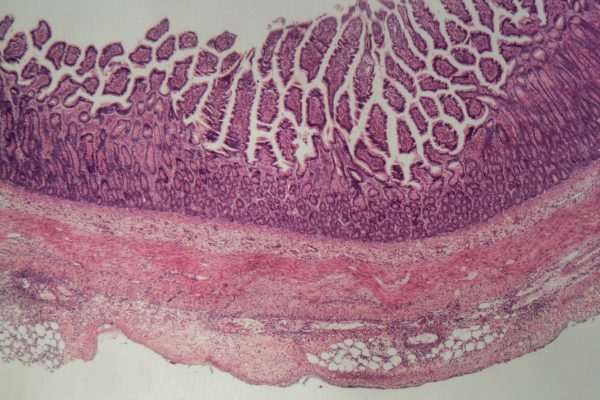 “Thinking of microscopic colitis as a condition of what the digestive tract likes and doesn’t like and carefully assessing what you put into your body and how your digestive system reacts, will help you identify what triggers your symptoms and how best to manage them.”

It is undetectable by the naked eye, and a biopsy observed under a microscope is needed for a diagnosis. Previously thought to be a rare condition—probably because biopsies weren’t taken when the colon looked normal—recent studies show that microscopic colitis is the cause of up to 13% of unexplained diarrhea and bloating. There are two forms of microscopic colitis: collagenous colitis (inflammation produces a thick band of connective tissue, or collagen, under the surface of the colonic lining that prevents proper absorption) and lymphocytic colitis (lymphocytes accumulate under the surface of the colonic lining). The two conditions share identical symptoms. Collagenous colitis is most common in middle-aged women, although it can occur in both men and women of any age, while lymphocytic colitis affects male and female populations equally. Microscopic colitis doesn’t lead to cancer like other inflammatory digestive diseases and doesn’t require surgical intervention.

Microscopic colitis symptoms can wax and wane – some patients will have no symptoms for months at a time and have flare-ups that last just as long.

Symptoms of microscopic colitis include:

Almost half of all patients with microscopic colitis have a concomitant (or associated) autoimmune disorder like thyroid or celiac disease.

We’re not sure what’s responsible for the inflammation seen in microscopic colitis, but it’s likely related to longstanding irritation of the gut lining by various substances (foods, medications, etc.), the immune system responds to these substances, and the result is inflammation.

Although we don’t know what causes microscopic colitis, we do know what makes it worse. Common triggers include:

In both collagenous colitis and lymphocytic colitis, the colon looks normal when inspected at colonoscopy (a procedure in which a thin tube with a camera on its end is inserted into the large intestine through the rectum). Therefore, a diagnosis is made only when biopsies are taken at colonoscopy and examined under a microscope. Because of the strong association with celiac disease, it’s important to screen for celiac if you’ve been diagnosed with microscopic colitis. Two methods of celiac testing include:

We are not sure what causes microscopic colitis and therefore, treatment is primarily based on trial and error. Therapy strategies that are often tried include:

These unrelated therapies suggest that we are stumbling around in the dark when it comes to treating microscopic colitis, which in part is true. One treatment option is found to be universally effective, and that is: determining how a person’s diet and medicine cabinet may trigger symptoms and once identified, making the appropriate lifestyle modifications to avoid those triggers.

Thinking of microscopic colitis as a condition of what the digestive tract likes and doesn’t like and carefully assessing what you put into your body and how your digestive system reacts, will help you identify what triggers your symptoms and how best to manage them. Pay close attention to the following foods and medicines (avoid these items for 4 to 6 weeks and assess your body’s response):

All these substances can contribute to inflammation, so avoiding them if your digestive tract is already inflamed makes sense. While we still rely on prescription medication in some colitis patients, the toxicity of many of the immune-modifying drugs used compared to the win-win of dietary therapy cannot be overemphasized. Taking a close look at what you’re eating and putting into your body and resolving to break bad food habits can be challenging, but it may be the most important step you take on the road to healing inflammation.