Gastroparesis refers to delayed emptying of the stomach and can be part of more widespread dysmotility syndromes. 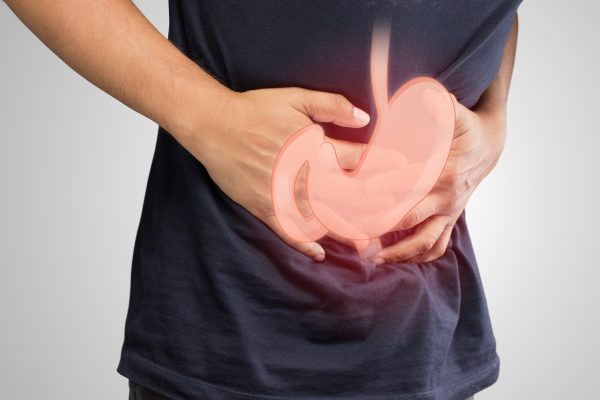 “Gastroparesis (delayed emptying of the stomach) is common in diabetes, but many conditions, including viral illnesses and bacterial overgrowth, can cause delayed emptying.“

Although the stomach isn’t paralyzed in gastroparesis, its function is slowed down to varying degrees, and bloating is one of the most common symptoms. It’s an under-diagnosed condition associated with nausea and abdominal pain that can lead to vomiting and weight loss in severe cases.

In most people, gastroparesis symptoms include:

Symptoms usually fluctuate, with flare-ups precipitated by a large, fatty meal or by eating too much fiber in one sitting. Gastroparesis can be severe in some people, especially in diabetics, whose stomach emptying can completely shut down when their blood sugar is poorly controlled, leading to abdominal pain, bloating, and recurrent episodes of vomiting after eating.

We don’t know the reason behind gastroparesis in most people. In some instances, the vagus nerve, which controls stomach emptying, can be damaged or affected by illness, causing the muscles to not work properly. Diabetes, intestinal surgery, and neurological conditions like Parkinson’s disease and multiple sclerosis (MS) can cause gastroparesis, as well as certain viral illnesses. Some lifestyle habits may contribute to or cause gastroparesis, including eating a lot of fatty foods and eating too late and/or large meals at night. Medical complications that can slow digestion and bring it to a complete standstill, which are sometimes mistaken for gastroparesis, include:

Slow transit, or constipation, is also sometimes mistaken for gastroparesis.

Gastroparesis is diagnosed with a test called a gastric emptying study, in which radioactive material is eaten with a meal, and the speed at which it takes to empty from the stomach is monitored and measured using a radioactive scanning device. The results from this test are used to assess if an individual suffers from delayed emptying of the stomach.