Polyps can be either benign or precancerous growths of tissue that form and protrude from the colon lining into the lumen. 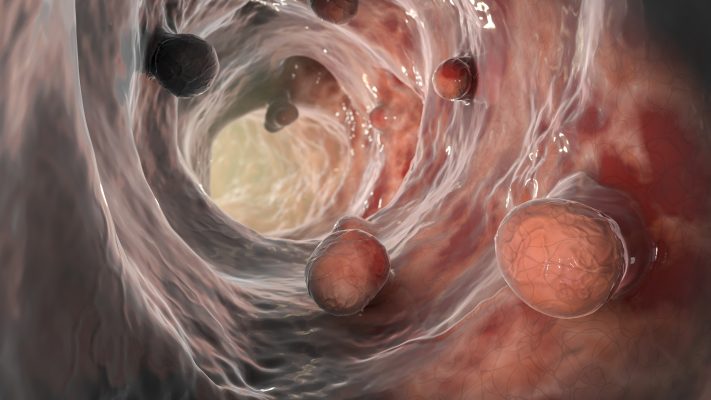 “A diet high in animal protein and low in fiber, plus genetic predisposition are major factors in developing polyps.“

Polyps are harmless, benign formations in their early stages. But polyps can grow large enough to cause bowel obstruction and may develop into colon cancer if they go undetected and untreated for long enough. Three categories of colon polyps exist: adenomatous and hyperplastic. Adenomatous polyps are usually larger and can be cancerous, while hyperplastic polyps are always benign and tend to be smaller in size. Polyps are more common in those over the age of 50, smokers, and overweight individuals.

Polyps are most times asymptomatic (they are usually detected at colonoscopy in their early stages), but can lead to the following symptoms if they grow large enough to cause bowel obstruction and/or if they are cancerous:

The root cause of polyp formation is unknown, but lifestyle behaviors, health history, and genetics heavily determine who will and who will not develop polyps. Polyps develop more often in individuals who:

Conditions that may predispose someone to develop polyps are:

Polyps are diagnosed at colonoscopy (a thin tube with a camera on its end is inserted into the large intestine through the rectum) and are best treated when detected early. A CT colonography (or virtual colonoscopy, where a CT scan is used to take 2- and 3-D images of the colon) can also be used to detect polyps, but a colonoscopy is often best, because it’s a procedure which allows for the biopsy and removal of polyps if necessary. Because large polyps, either benign or cancerous (although larger polyps are more likely to become cancerous), may become inflamed and bleed, stool tests that look for blood in the stool can help in diagnosing polyps. If the result of a stool test is positive for blood in the stool, a colonoscopy is recommended for further investigation.

If you are diagnosed with a polyp, it should be removed or biopsied during a colonoscopy procedure. For those who have had polyps and those who are at a higher risk of developing polyps because of genetic, lifestyle, or medical history reasons, a high fiber mostly plant-based diet, minimal or no alcohol, and regular exercise are important for preventing future polyp formations.