Ulcerative colitis (UC) is a form of inflammatory bowel disease (IBD) that causes inflammation in the colon and rectum, including ulcerations and bleeding in the intestinal lining as well as a thickening and narrowing of the colonic wall. 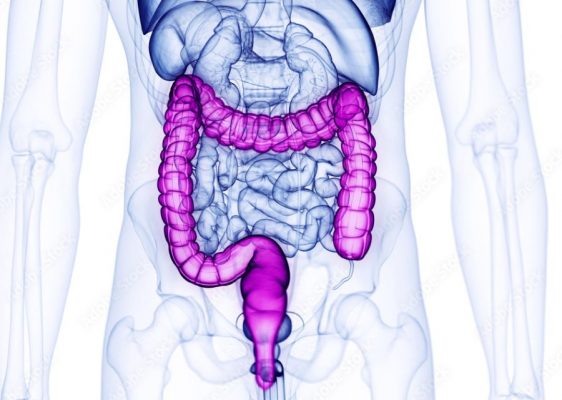 “The cause of ulcerative colitis is unknown but emerging evidence shows that gut bacteria play a primary role in the development of the disease.”

UC symptoms are also manifested outside of the gut and may include fever, joint pain, and mouth ulcers. If the disease reaches a progressive state, ulcerative colitis can lead to cancer and bowel obstruction and may ultimately require surgery. Ulcerative colitis is a digestive autoimmune disease, where the immune system wages war against the body’s healthy tissue, leading to chronic inflammation. Many individuals with UC have concomitant (or associated) autoimmune disorders like hypothyroidism or celiac disease. The cause of ulcerative colitis is unknown but emerging evidence shows that gut bacteria play a primary role in the development of the disease.

Symptoms of ulcerative colitis include:

The exact cause of ulcerative colitis (UC) is unknown, but disruptions in the microbiome are strongly associated with autoimmune diseases like UC. Lifestyle behaviors that can damage gut bacteria include:

These risk factors may increase an individual’s susceptibility to disease by suppressing the natural development of the immune system, allowing pathogenic bacteria to proliferate, destroying the integrity of the intestinal lining, and killing off essential bacteria.

Antibiotic use is strongly associated with IBD. Antibiotics wipe out large amounts of healthy bacteria and create a typical gut bacteria profile that is seen in IBD patients: an overall decrease in diversity of gut bacteria, higher levels of pathogenic species, and lower levels of protective ones. Being treated with antibiotics in your first year of life is associated with a threefold increase in risk for IBD, compared to children who haven’t received antibiotics.

Although most people with UC don’t have a family history of the disease or a genetic susceptibility, more than one hundred gene mutations are associated with IBD disease, and those of Eastern European Ashkenazi Jewish descent have a four-to five-fold increased risk of developing IBD. Not everyone who is genetically susceptible develops the disease; an environmental trigger must be present that unmasks the genetic risk and leads to symptoms. This environmental trigger most often involves microbial disruption as described above.

An integrative approach that includes nutritional intervention and stress reduction works well for treating individuals with ulcerative colitis. A specialized diet in combination with high-dose prescription-strength probiotics has been successful in accomplishing remission in IBD and reducing or eliminating the need for toxic medications. Most UC patients show improvement in their inflammation and symptoms after removing gluten (as well as refined sugars) from their diets.

Studies show that not only can diet and exercise improve symptoms and allow a reduction or discontinuation of drugs, but it can also lead to healing of the inflammation in the gut. Studies also infer that these changes are most likely mediated through alterations in gut bacteria.

Bottom line in treating ulcerative colitis: one of the most powerful tools in preventing and treating IBD is the food we eat, since that’s what determines which bacteria grow in our gut.

For patients whose disease is severe, cooling things down with stronger conventional therapy first is recommended before embarking on the slower pace of dietary change. Some patients are just too sick and need fast acting and potent drugs. Even then, the goal is always to transition off these drugs as quickly as possible once the inflammation has improved, and to try to maintain the results with diet, lifestyle, and less toxic medications whenever possible.

Because gut bacteria play a large role in UC, a robust probiotic can be helpful in rehabbing your microbiome and controlling your UC symptoms. Visbiome is the probiotic with the most scientific data behind it in terms of treating UC.

More and more evidence points to the role of microbial imbalance and reduced microbial diversity in the pathogenesis of IBD. Early studies utilizing FMT to treat ulcerative colitis show amelioration of symptoms as well as the possibility of sustained remission and even cure. Large case series demonstrate improvement in symptoms and cessation of medications in a high percentage of patients, particularly when used in conjunction with dietary therapy.

Unlike C. diff where the response to FMT is rapid – a few days in most and just hours in some – with ulcerative colitis it takes longer for symptoms to improve, and the improvement may increase over time, as the microbiome gradually shifts towards normalcy. Although clinical data exists to support the use of FMT in treating UC, especially alongside dietary modifications, FMT is not first line therapy for UC and should only be considered after standard treatments have proved ineffective, and in a medically supervised setting or as part of a clinical trial.