Ulcers, also called peptic ulcers, are sores that form in the lining of the upper part of the small intestines, including the duodenum, stomach, and less commonly, the esophagus. 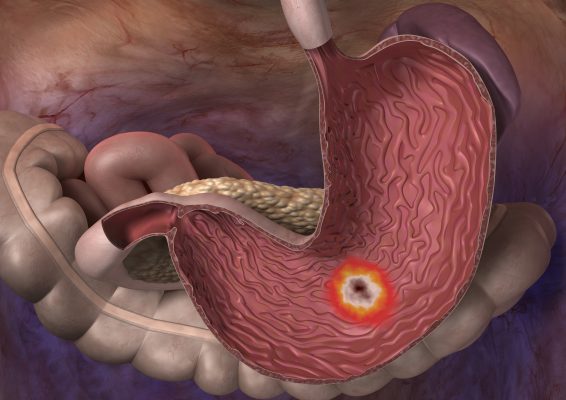 “With proper treatment, most ulcers heal without complication.”

The most common symptom of ulcers is a burning abdominal pain that is felt anywhere between the naval and the chest. Although many causal factors are associated with ulcers, the most common factors include excessive use of NSAIDs and H. pylori infection. With proper treatment, most ulcers heal, but if timely treatment is not sought or other complications arise, ulcers can develop into more serious conditions that cause internal bleeding and even stomach cancer.

Symptoms associated with ulcers include:

Conditions associated with ulcers are:

Lifestyle choices such as poor diet and excessive alcohol consumption, smoking, and NSAIDs increase intestinal permeability of the gut lining, which allows bacteria to translocate through and damage the mucosa. Older populations are more at risk for developing ulcers. This may be due to the prevalent use of NSAID’s in arthritic elderly individuals or the fact that the valve between the stomach and the duodenum relaxes with age, allowing bile to leak into the stomach and damage the lining. Studies show that in the majority of individuals suffering from ulcers, the bacteria H. pylori is detected. Because of these studies, H. pylori infection is thought to be one of the most common causes of ulcers, along with NSAIDs.

Tests that are commonly administered to diagnose an ulcer are:

Because a large percentage of people suffering from ulcers have H. pylori in their gut, being tested for H. pylori may be helpful in diagnosing your ulcer. The following tests are used to diagnose H. pylori:

With proper treatment, most ulcers heal without complication. Adopting healthy lifestyle that include stress reduction, eating a healthful, vegetable and fiber rich diet, and avoiding alcohol, smoking, and NSAIDs, will help you heal your ulcer while avoiding toxic medications that may lead to short term fixes with long-term consequences.

The following medications are often prescribed for ulcers:

Although these medications may offer short-term relief, they can put you at risk for developing additional ulcers in the future. Antibiotics and acid blocking medications throw off the bacterial balance that protects the intestinal lining from damage by pathogenic bacteria. Because of these detrimental effects, lifestyle modifications should always be the first line of defense in treating an ulcer.