Hilary didn’t have a history of lots of antibiotic use in the past, but she was a picky eater in childhood who avoided fruits and vegetables like the plague. She was now in her thirties and in good health until a case of severe gastroenteritis, with nausea, vomiting, fever, and dehydration led to a five-day hospitalization. The cause of the gastroenteritis was never identified, but because she had a fever, while in the hospital she was treated with two different intravenous antibiotics and discharged on an additional ten-day course of oral antibiotics.

Hilary felt better by the time she completed the antibiotics, but three months after the hospitalization she developed mushy stool that she described as having an oatmeal consistency, as well as severe bloating. Upper endoscopy and colonoscopy were unrevealing, and biopsies were negative for celiac disease, microscopic colitis, or any other abnormalities. A month later Hilary was prescribed a week of antibiotics for a suspected UTI, and then yet another round of a different antibiotic for a sinus infection. The mushy stool got a lot worse and she also developed rosacea, vaginal yeast infections, and headaches. An intestinal permeability (IP) test for leaky gut was eventually ordered and was positive.

Although Hilary hadn’t taken a lot of antibiotics before her hospitalization, she had been on acid suppressive therapy for years for intermittent symptoms of acid reflux (mostly related to eating high fat foods late at night), and had a long history of daily ibuprofen use for various aches and pains—both major risk factors for developing increased intestinal permeability (aka leaky gut). The acute gastroenteritis and the excessive course of antibiotics that followed were likely the inciting events that led to the abnormal stools, bloating, rosacea, yeast infections, and headaches— all manifestations of leaky gut. Her symptoms eventually resolved after several months of dietary therapy, probiotics, and discontinuation of the ibuprofen and acid blockers.

Hilary’s experience highlights the importance of how a background of risk factors that you may not even be aware of can increase your likelihood of developing leaky gut after an acute event like an infection, or a course of antibiotics. 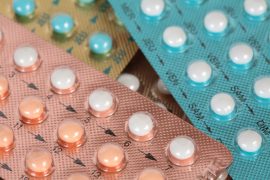