Janice: What is the most effective way to treat Helicobacter pylori (H. pylori) & coexisting SIBO?

Dr. Chutkan: Janice, let’s address the H. pylori first. H. pylori is a bacterium that can infect the stomach. Infection most often occurs during childhood and goes undetected without ever causing symptoms. Later in life, H. pylori may sometimes be associated with ulcers or stomach cancer, but for most of us, it’s a longtime harmless resident of the stomach. In fact, almost half the world’s population is infected with H. pylori.

Recent studies show that H. pylori likely has a protective effect in childhood, including regulating ghrelin—the “hunger hormone” produced in the GI tract that induces hunger. Without H. pylori’s influence on ghrelin, children may lack the cues that tell them when to stop eating. Unfortunately, less than 10 percent of school age children in the U.S. now harbor H. pylori, a number that’s decreased dramatically from decades ago as a result of widespread use of antibiotics.

Because it may be protective in some cases, harmful in others, and neutral in many, eradicating H. Pylori should be case specific. Although as mentioned above, H. pylori can be associated with negative outcomes in later life, we’re realizing – thanks to the work of scientists like Dr. Martin Blaser – that for many people, H. pylori has a protective effect. Unnecessary eradication can lead to even more problems, like esophageal inflammation, increased nausea, acid reflux, and even cancer. Because the role of H. pylori changes as we age (and may also change based on where we live), and because eradication can lead to serious complications, your demographics, history, and symptoms should be carefully considered before undergoing H. pylori eradication. All too often I see people with non-specific digestive symptoms being treated for H. Pylori, only to feel worse after treatment.

If you have H. pylori infection, the most common eradication treatment is antibiotics (usually at least two different antibiotics to prevent bacteria from developing resistance), as well as acid suppressing drugs (proton pump inhibitors, H2 blockers, or Bismuth subsalicylate) to protect the stomach lining. But this form of eradication is strongly associated with dysbiosis (gut bacteria imbalance) and may even cause small intestinal bacterial overgrowth (SIBO). So although it may wipe out your H. pylori infection, it may cause a cascade of other problems.

If you are at increased risk for stomach cancer, eradication may be beneficial. But restoring your microbiome is the first line of defense in treating asymptomatic H. pylori infection. Along with a plant-based high-fiber diet, probiotics that contain a type of bacteria called Lactobacillus casei that inhibit the growth of H. pylori may be the least detrimental combo therapy.

In the case of treating co-existing H. pylori and SIBO, they both benefit from the same intervention – microbial restoration, or balancing your gut bacteria through diet and lifestyle methods. Focus on eliminating processed foods and sugar, and consuming large quantities of vegetables and other high fiber, plant-based foods. This is the best way to grow a good gut garden.

For a complete guide to treating SIBO, check out The Gutbliss Guide to SIBO. For more on H. pylori and the experience of a real life patient check out Lucia’s story in this edition. 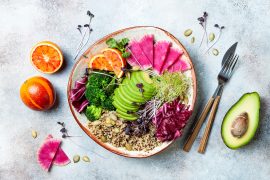 Plant-Based & Fatigued – How Do I Improve My Energy Levels? 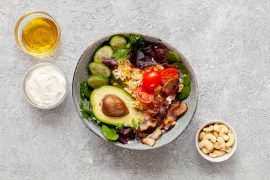 What’s Your Beef With The Ketogenic Diet? Dr. Chutkan Explains