Bloating is generally caused by gas (and sometimes fluid), and it usually ebbs and flows—you may have a flat abdomen in the morning but by evening, you look and feel 6 months pregnant. Bloating has become a rapidly increasing epidemic. For many, the symptoms are daily and relentless, but even when symptoms aren’t severe, they can still be extremely bothersome.

There are lots of different causes of bloating, and one of the commonest is excessive sodium intake, which causes you to retain water not just in your abdomen but throughout your body. A study published last month in the American Journal of Gastroenterology looked at data from the DASH-Sodium trial. 412 participants consumed three levels of sodium intake – 50, 100, and 150 mmol/day. Each intake was consumed over a 30-day period with 5 days of rest between each period. Presence of bloating was recorded at baseline and after each period. Regardless of the diet consumed, including dietary fiber content, high sodium intake significantly increased bloating.

So, if you’re experiencing a lot of bloating, one of the first things you should consider is reducing your sodium intake. But how much sodium should you be consuming each day, what’s the best way to cut down, and are there healthy versus unhealthy sources of sodium? Let’s dig a little deeper.

The 2015-2012 Dietary Guidelines for Americans recommend consuming less than 2,300 mg of sodium daily for optimal health (and less than 1,500mg for those at high risk for heart disease), yet the average American consumes over 3,400mg. THE BEST WAY to reduce your sodium intake is to eliminate processed foods from your diet: a slice of bread can contain as much as 230mg of sodium and a slice of frozen pizza as much as 730mg. Other processed foods high in sodium include boxed cereals, dairy, soups, salad dressings, and packaged snack foods like chips, crackers, and pretzels.

It’s been estimated that if you are consuming a 100% unprocessed diet, with added salt from your salt shaker, your daily sodium consumption will be around 1,200mg of sodium daily. And if you’re eating 100% plant-based, as well as unprocessed, without adding any additional salt to your food, your diet will consist of approximately 300mg daily (600mg daily for those consuming one third of your unprocessed diet from animal foods). While these estimates are just that…estimates, it’s evident that most of our widespread excessive sodium intake in America originates from processed foods, not from the salt shaker. And in fact, only about 15% of our sodium intake comes from the salt shaker.

Bottom line: The first step to reducing sodium in your diet is to rid your pantry and fridge of processed foods. The second step is to migrate towards a primarily plant-based diet.

Once processed foods are eliminated and your diet is more plant-based, it may be time to consider the salt in your shaker. Many of us cook veggie-centric, microbe-packed homecooked meals… then douse them in salt once we sit down to eat (I’m definitely guilty of this from time to time!) On the other hand, it’s important to note that we need about 500mg of sodium per day to survive, so if you’re consuming a primarily plant-based unprocessed diet, adding a little extra salt may actually be helpful. To give you an idea of how much you’re using from the shaker, keep in mind that 1 teaspoon of salt contains approximately 2500mg of sodium.

So now that you have a plan to reduce your daily sodium intake (and your bloat!), you might be wondering what’s the best salt to use. There’s lots of information out there, and although very little is scientifically based due to the lack of studies comparing salt types, there doesn’t seem to be a huge difference in salt variations. They all contain similar amounts of sodium-chloride and trace metals. At Gutbliss we recommend avoiding traditional table salt (and some types of kosher salt), as it contains additives and anti-caking agents. Some sea salts can also contain traces of heavy metals and microplastics due to ocean pollution. As a general rule, we recommend choosing Himalayan and Celtic salts when possible for less additives and slightly higher trace metal content. 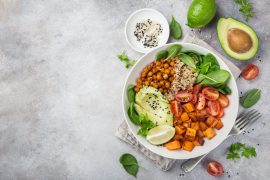